Spain is well known for it superior strength in sports. Alberto Contador roams the Tour De France mountains, Alonsos rear lights are visible to most formula 1 racers and the spanish national side is winning largely all there is to win in football. On top of this the big spanish clubs such as Real Madrid and Barcelona dominate the european stages and champions league year after year.

You wont find football quite on that level in Javea. The best team in Javea is CD Javea, a sometimes amateur, sometimes semi-pro outfit playing in the league Preferente, which is the 5th best league or somewhat similar to the english conference league. CD Javea has in the past had short spells in the third division above and a few periods with ambitious moneymen and sugardaddys in the presidents office, but always seems to settle around the middle of the preferente league in the end. 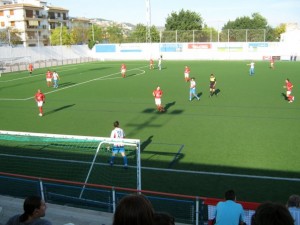 These days CD Javea are hard hit by the crisis, similar to many other clubs in Spain.

The consequence has been a pure amateur lineup featuring almost exclusively local players from Javea. In terms of results the difference doesnt seem to be noticable, losing the semi-pro journeymen of spanish football has made room for local youngsters from the Javea Football Academy and what they may still lack in skills and experience is made up for by an eager passion to perform for their local team in front of friends and family. 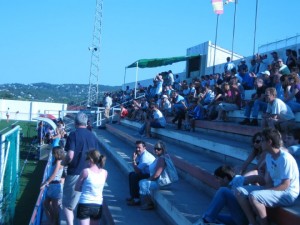 Below CD Javea in the 6th best league is a newcomer on the Javea football scene. The club Mediterraneo was formed by south american expats living in Javea and has rapidly advanced up through the lower leagues with a squad entirely consisting of local spaniards and expats. One more promotion for Mediterraneo and we will have a proper local football derby in Javea. Just wait, it wont be long.

Both Javea teams play their homegames in the tiny Municipal stadium located on the outskirts of town. It features no roofing and concrete stands – so bring a hat or umbrella if the sunshine is blistering (or in the unlikely event of rain). On the upside the enthusiastic home supporters tend to make for a funny couple of hours of yelling insults in spanish, screaming at the referee and drinking cheap beer in the small café inside the stadium. The crowd is usually a healthy mix of spanish and expats, lead on in the cheering by the fanclub Javeamigos that tends to bring drums, singing and happiness to the stands.

Ok. Football isnt on a high level in Javea, but if you fancy seeing real and unpolished sports with proud locals cheering them on, CD Javea and Mediterraneos games are worth a visit. Both play their home games on sundays – check the local news for specific times.

If you insist you wanna watch some of that famous toplevel spanish football, a trip to Valencia during your holiday in Javea is the obvious choice. The Valencia team tend to be right below Barcelona and Real Madrid in the league and always features some international class players in the squad. The stadium in Valencia is easily found from the motorway signs after a drive of about 1hour from Javea – and you can just turn up and buy a relatively cheap ticket, the giant stadium in Valencia never sells out.

Loving the Spanish lifestyle in the glorious sea side town of Jávea, Spain. For inquiries, contributions or random banter about Javea - shoot us an email at Javea@JaveaVacation.com.
View all posts by Morten Javea Vacation →
This entry was posted in Costa Blanca News, Javea-Xabia, What To Do In Spain and tagged cd javea, club deportivo javea, lower league football spain, mediterraneo javea, spanish football, sports in javea. Bookmark the permalink.
By sparlaxy.de