Bull running is an intrinsic part of the Sant Joan celebrations in Jávea, and is considered ‘controversial’ by most foreigners and ex-pats. As a vegetarian and lifelong animal rights activist I feel this is based upon a misunderstanding, and is unhelpful insofar as it distracts from, and causes local hostility toward, opposition of the very real issue of bull fighting.

In towns like Jávea where there is no bullring, bull running has no connection with fighting, and IMHO is substantially less dangerous or stressful for the bull than most other sports involving animals, let alone intensive farming techniques, so I have presented here what actually happens in the hope of educating people around the world regarding the differences.

The event has more in common with an American rodeo, but without the more stressful/dangerous (for the bull) aspects, such as roping, riding and bulldogging.

The bull events during Sant Joan in Jávea involve local ranchers showcasing their prize bulls, and the intent is for local men to prove their bravery (or insanity) by facing down the beast, with no intent to hurt or injure it.

Indeed for most of the time the bull is very much in control of the situation, and happily follows the herd leader back to the compound when the next rancher has his turn. 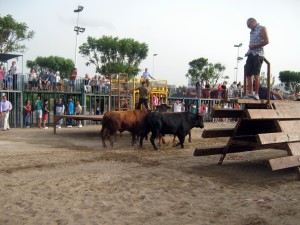 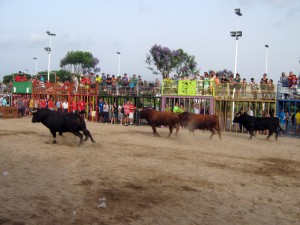 I am reliably assured that some of the guys carry rings in their hands, the idea being to try to get them on the bull’s horns, but I have never seen anyone get even close to achieving this.

I’m not particularly presenting the event as a great thing here – if anything I find it pretty dull – but as you will see in this video the greatest stress any of the bulls had to deal with was being showered with party foam (which it didn’t even seem to notice) and having sticks and t-shirts vaguely waved at it. The biggest problem seems to be the bull losing interest and wandering off, ignoring the people. 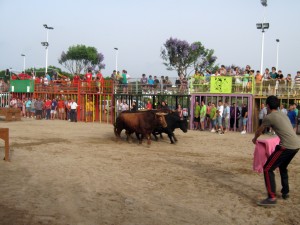 Loving the Spanish lifestyle in the glorious sea side town of Jávea, Spain. For inquiries, contributions or random banter about Javea - shoot us an email at Javea@JaveaVacation.com.
View all posts by Morten Javea Vacation →
This entry was posted in Fiestas & Nightlife Spain. Bookmark the permalink.
By sparlaxy.de