The Euro 2012 football championships are about to kick off. Being on holiday in Javea Spain does not mean you have to miss the important games, to the contrary, Jávea is a fantastic place to enjoy the big sporting events with fellow football fans.

The England Games – Big Screens and Beer in Javea
As usual Javea has been blessed with an influx of English tourists and summer residents replacing the rain in England with Spanish beaches and sunshine. Several bars cater specifically to the English audience in Xabia and exactly those places are often the best ones for catching the England EURO2012 games with fellow Union Jack supporters. 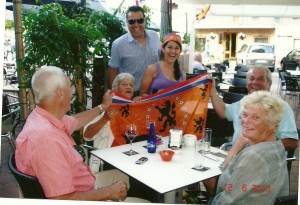 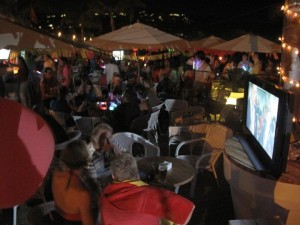 An Shebeen – The Irish Pub in Jávea
Whilst nominally an Irish pub An Shebeen might well be the most atmospheric place to catch the England games. They have a giant projector screen on a back wall that is visible from most of the bar and several smaller screens strategically placed round the pub to ensure you never miss a thing.

Big sports events are typically celebrated at An Shebeen with parties before and after, fan packages and special offers on food and drinks. The Euro2012 is no exception and you can enjoy the games with cheap Carlsberg, 2 for 1 on the yummy homemade hamburgers and much more.

There is always a huge crowd of England fans, a variety of expat regulars and tourists, lined up for the games at An Shebeen, the service is superb and friendly – and they normally pride themselves in having the very best big screens in town for the games. Certainly for the England games – or if you simply want any game in premium quality with other football fans guaranteed to be around, An Shebeen is a highly recommendable choice by the Arenal Beach in Javea.

Jaspas Bar – The Homely Alternative On The Hill
Jaspas Bar is located in between the Arenal Beach and Cap De La Nau in Javea. It is the closest the town gets to a real English pub with dart, pool tables and football on the big screens at all times.

I imagine Jaspas Bar serves exactly the same role as most independent local pubs in England. Its like a small friendly community having fun with the pub games, karaoke and a wide range of events – and of course they are geared up for the Euro 2012 as well. 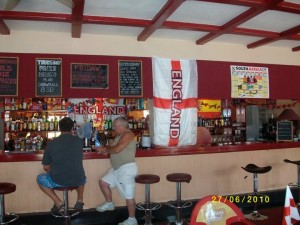 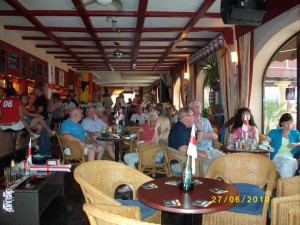 Jaspas Bar has plenty of tv screens ready to show all the Euro 2012 games, theres guaranteed to be parties around the England games and even if you just fancy quietly watching Polen and Ukraine fight it out – Jaspas is a really nice place to do it because of the homely atmosphere.

Geographic Bar – Football with a Sea View
The Geographic Bar is located right in the middle of the bar and restaurant strip surrounding the Arenal Beach in Javea. The classy little place is always a fantastic choice to go and watch any kind of sports as they have multiple big screens in excellent quality and are always happy to put on whatever strange game you fancy watching.

Given its location the Geographic Bar will have a higher percentage of tourists than the other suggested places to watch the Euro 2012 games in Jávea. Obviously that makes the vibe of the place a little bit more unpredictable as the core of regulars are a minority. Yet, Geographic Bar always delivers pleasant service and some of the most fantastic cocktails and fresh smoothies on the Arenal to quench your thirst (along with plenty of nice draft beer options of course). 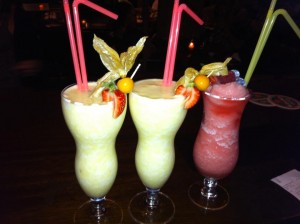 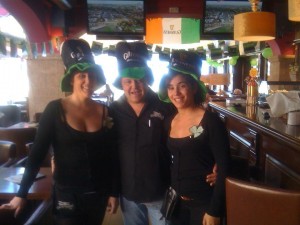 England games at The Geographic Bar will always be packed and spill out onto the bar strip for a street party in the unlikely event of an English victory.

The Spain Games – Experience The Spanish Passion For Football
All the bars and venues above will of course show the Spanish team marching towards victory in the Euro 2012 and they are almost guaranteed to provide a fun evening doing so as most of the expats and tourists do support Spain along with their home team.

However, to truly get a feeling for the Spanish passion for football and enthusiasm as the local heroes enter the pitch, it is worth exploring another range of bars catering more to local Spanish audiences.

Socco – Football Crazy Spanish Night Club
One of the newest night clubs on the Arenal Beach is the classy setup Socco. Being located right by the beach the club will obviously have guests from all over the world but it is a very popular choice with local Spanish residents looking for a party and well known to make excellent parties out of football games.

If you don´t wanna venture too far from the beach but still catch a Spain game in the company of people who consider the outcome a matter of life and death, Socco is your obvious choice. A quick prediction is that every single game will have Socco full to the brim of Spain supporters and huge celebrations before and after. The local Club Deportivo Javea players are often seen partying at Socco (which might explain why el futbol club Javea cant quite compete with Barcelona yet) but it all just adds to the football crazy atmosphere of Socco. 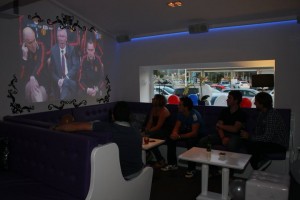 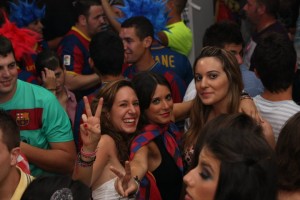 The big screens at Socco are excellent for watching the games, the place is brand new and classy, the booze and beer is reasonably priced and the visitors are a melting pot of happy party people from around the globe. Excellent choice on the Arenal!

El Varadero – Outdoor Screens and Street Parties
During the day El Varadero is a rather stylish and relaxing cafe on the Javea port, Duanes Al Mar, but when the Spanish football fever sets in the place explodes in happy parties and jolly celebrations.

Yours truly chose El Varadero to watch the World Cup Final in 2010 as its simply such a fantastic setup with screens outdoors that you can sit in the comfortable cafe area and watch. But El Varadero always tops it up with massive decorations, plenty of dressed up football fans and a staff thats cheering harder for Spain than everyone else. 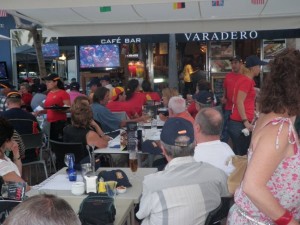 The port is often a bit overlooked in comparison to the Javea Old Town and the Arenal Beach, but El Varadero and their fanatic football fiestas are really worth going there for!

Spanish Football in Old Town
Every single bar with the slightest bit of self respect in Xabia historic center or old town will be showing the Spain games live on big screens. The best thing really is to head up there a little while in advance, wander around the cobbled hills and seek out a bar you fancy.

There are at least 5-6 good options in or just around the square at the church of San Bartolomé and the indoor fresh food market. Look for the crowds, the face painted fanaticos and the happy gangs of Spanish supporters roaming the streets. 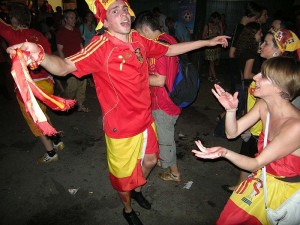 In the side streets and spread all over Jávea old town plenty of small cervecerias and bars will be ready to celebrate the football games too. A good option always is Bar Jose just behind the post office or a relaxing game in the beer garden at Penelope by the Plaza De La Constitucion.

There is never any trouble, brawls or drunken riots attached to football games in Javea, you are perfectly safe to bring the family even to the biggest games … and should the final end up being Spain vs England, that would be an occasion for much teasing and singing but absolutely nothing to worry about in terms of safety – even if something really strange happened and England actually won !?!