If you are self catering in your holiday accommodation in Javea, you are probably on the lookout for places to do some proper shopping for refreshments, food and meat for the BBQ.

Jávea has a healthy mixture of supermarkets with different features and prices. You will most likely find one that suits you.

The main English supermarket in Jávea is Iceland. The chain store by Overseas.es is an expansion upon the Iceland stores you may know from England in so far as the Spanish versions are carrying a full range of stock with the non-frozen articles taking up more than half the floor space. Iceland in Jávea is expensive and having primarily imported foods on offer you wont get the blessings of fresh food and Spanish specialties in there. You will however be treated to all the brands you are used to from England. Iceland is found right in the middle between the Port, the old town and the Arenal – just take a drive down the main road connecting the 3 parts of town.

Whilst Iceland is by far the biggest English supermarket in Jávea there are several smaller ones equally featuring imported brands from the UK and Northern Europe. One of the best ones is Keith & Lynns on the road up towards Cabo De La Nao, which features homemade bread and cakes, a secondhand book exchange of English books etc.

In general, you pay extra for imported brands in the English stores, but if your Spanish is limited or you have special needs to cater for, the options are plentiful and if used to Northern European prices you wont be shocked by the final bill.

German Supermarkets in Javea
Jávea has a rather large German population of expats and they are well catered for with no less than 3 dedicated supermarkets.

The 2 German discount Supermarket chains Liedl and Aldi both have stores in Jávea featuring more or less exactly the same stock as is carried all over Europe by them. The prices are competitive even in comparison with the cheapest Spanish supermarkets. Whilst Liedl and Aldi in Javea both have German origins and plenty of stock targeted at Germans, their cross-European focus means you can easily go in there and pick up British brands too at a very affordable price.

The third German supermarket is more of a specialty store called Aleman, located by Jávea Park. The shop is fairly tiny but full to the brim with German food such as curry heerings, remoulade, salty liquorice and brown flat-bread. Obviously, given the similarity in taste between Germany and Scandinavia, tourists from Denmark, Sweden or Norway will most likely find plenty of items from home as well.

Balkan Supermarket in Javea
In the more specialised end of the market theres a small but well stocked Balkan supermarket on the main road from the Javea port to the historic center.

The Bulgarian/Romanian supermarket carries a wide range of Eastern European specialties at quite reasonable prices. 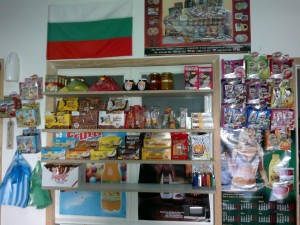 Spanish Supermarkets in Jávea
You are on holiday in Spain. Why not try some of the specialties the Spanish supermarkets have to offer? Ranging from giant hams over spicy sauces to fresh baked bread.

Supermercadona is the big mainstream supermarket with a huge and varied stock. They are not the cheapest but they carry largely anything the heart desires. You can find Supermercadona just below Javea old town by the big car park and on the main road leading to the Arenal.

The Mas Y Mas shops you see scattered all over the place are simply the kiosk versions of Supermercadona from the same company. Mas Y Mas has less of a choice on the shelves, the prices are higher and the shops are smaller – but they serve their purpose as little convenience stores that will usually be within walking distance.

For more specialized Spanish food shopping you can venture into Supercor, which is rather expensive but has loads of extra delicious things on the shelves. Another option of course is the indoor market in Javea old town, whilst not a supermarket you can do most of your food shopping there and get a real treat of fresh fish, meat, vegetables and bread directly from the producers round Xábia. 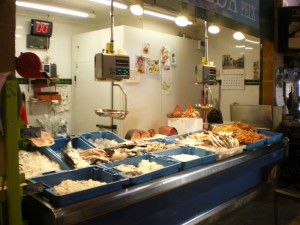 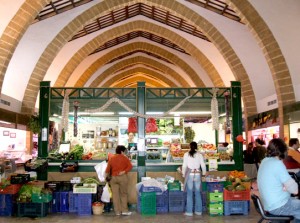